Due to the recent news that Super Nintendo Worlds at Universal Japan and Hollywood are now under construction, an image recently posted by Ladbible has intrigued us here at OAT. Even though the below image looks like a Disney map with stuff added on and the fact it doesn’t have the right logo or name that Universal have released for the Japan version we’ve taken some inspiration from it..

We’re pretty certain that there will be a Mario Kart and Donkey Kong attraction and a little bit confident that there will be a Pac-Man attraction. We have also thought about what other IP would be available such as Animal Crossing, Pokemon and Zelda but the image has nodded toward a Mii Plaza and a lot more attractions based on Super Mario such as a Mushroom Kingdom, Luigi Mansion and a Toad ride – all of which are cool ideas but not yet confirmed.

Universals own words about the 3 worlds coming to Japan, Hollywood and Orlando show that this is a huge project.

The goal of everyone on this project is clear: to bring the characters, action and adventure of Nintendo video games to life within Universal theme parks. And to do so in new and innovative ways that capture what makes them so special. All of the adventure, fun and whimsy you experience through a screen will now be all around you – in breathtakingly authentic ways.

Dan Kilne, when speaking with The Motley Fool raised the same point that has been going around for a few months now about where the Orlando Nintendo world will go.

Right now, at the Universal Studios location in Japan, they’re actually already under construction on what’s called Nintendo Land. It’s a handful of rides. They’ve been very secretive. We know there’ll be a Mario Kart ride. Think of it like the Star Wars expansion at Disney, a very immersive land, a big deal. In Orlando, they’ve said, “We are going to build out Nintendo properties.” But they’ve been very cagey about where. The rumors had always been at the original Universal Studios. There’s a kids’ area that’s a little bit lifeless, it would make sense. But then, about a month ago, it became public that Universal Studios is building a fourth gate, another theme park, and they’ve amassed a big chunk of land to do that. So, it’s very logical to think that Nintendo is going to be the cornerstone, the Harry Potter, of this new theme park. And maybe there’ll be something tying it to one of the other theme parks, like the train ties the two Harry Potter Worlds together to help sell multi-day tickets. This is a risk for Universal and a huge win for Nintendo, because they’re getting the licensing fee whether it’s an instant success or not.

I like the idea of another Hogwarts Express type ride to connect the new park too!

As always, we will keep you updated if Universal release any concrete info 🙂

There have been tonnes of rumours that Super Nintendo World may not be coming to Universal Studios but instead maybe to one of the new Universal parks yet to be built.. This would also mean loads more room for rides and attractions!

Now we’ve already spoken about the rumours surrounding Donkey Kong and Mario Kart attractions and maybe even a Yoshi attraction as well as kids areas however some more speculation has been happening regarding the possibility of a Kirby themed attraction or a Pokemon dark ride but best of all it looks as though there might be a Pac-Man attraction making an appearance!

The above image and below video are for Nintendo World set to open in Japan in 2020 with the Orlando one opening shortly after.

In 2014 Universal filed a patent which was granted approval this year which shows a Pac-Man style ride vehicle which looks as though it will be used in a bumper car style attraction. It looks as though the floor would be self-illuminated and riders would be able to ride over images that will cause them to score points which can be tracked through a display module in the car. Once a rider drives over an image it will either disappear or change colour..

It also looks as though the ride vehicles will navigate through specific pathways that can actually change during a ride sequence depending on what images you ride over. This could cause you to freeze or be slowed down for some time. It also seems like riders will be able to affect other riders experience too by blocking other cars to gain more points.

The patent states the following:

“the game vehicles may bump into one another or block the path of another vehicle to prevent certain game actions. Information about the vehicles movement relative to the floor, as well as the bumping and blocking activities may be provided to a game controller to assign scores for individual vehicles or a team of vehicles. For example, bumping into another vehicle may earn points for the initiator of the bumping. In another embodiment, the bumping may be unscored, but the bumping may prevent the opponent’s vehicle from increasing its own score. Images attached to the patent shows both a Pac-Man-like ride vehicle and a ghost-looking one with notes indicating that the two separate designs could signal opposing teams within the game.”

Now this may be sounding like quite a rough ride but Universal have explained that the ride vehicles may be programmed to not actually contact other cars or slow them down before impact and its sounds like all cars will be equipped with a steering wheel, brake and gas, pedals, a joystick, a display screen, one or more buttons etc.

Call me a nerd but the floor sounds like one of the most interesting things about this attraction. Looking at the patent it could be either an LCD or LED display surface which is actually a very techy move by Universal. If you’re a nerd too you might remember that Disney had an idea about using this type of technology for Pandora to have interactive sidewalks that would react to footsteps – there must be a reason this wasn’t bought to life.. it could be that it was because it is set outside whereas it looks as though this Pac-Man style attraction for Universal will be inside.. hmmm..
For us brits, Bumper Cars are a key part of any fair and you can even find them inside most UK themeparks however this would be the first attraction of its kind in any major Orlando Theme park however as we always say.. most patents never actually come to life so we cannot guarantee this is going to be a thing however Nintendo World and Pac-Man fit together very well so it would be an awesome addition! What do you guys think?!

Check out some images from the patent here: 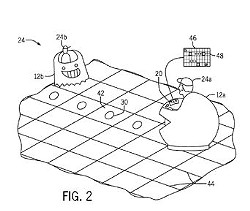 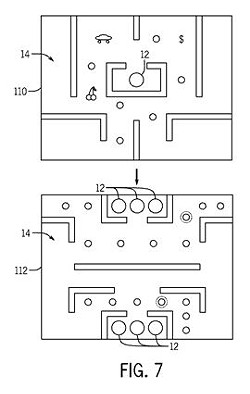 If we weren’t already excited enough about Super Nintendo World, there is some rumors flying around that Nintendo could be expanding over both Universal parks.

Sources have told a Orlando news channel that Universal are planning to eventually add more Nintendo rides and attractions to Islands of Adventure AND to the recently purchased 500 acres of land..

Up until now we have only expected Nintendo to appear at Universal Studios – taking the place of KidZone and building permits released on Tuesday include a 8.8 acre Super Mario Land in that spot with Donkey Kong and Mario attractions anticipated. There is also speculation that this could be part of a bigger picture and that there is an idea for a possible film project with Illumination Entertainment, the studio behind Despicable Me to maybe make a Super Mario Bros CG Movie.

The above image is what we are expecting from Super Nintendo World in Japan which is expected to open in 2020 with the Orlando one opening shortly after.

“You’ll feel as if you’re playing inside your favorite games – in real life.”

We already have lots of information on what Super Nintendo World will have to offer however Universal have not commented on this recent speculation.

There is so much that Nintendo has to offer such as Zelda, Animal Crossing, Pokemon etc that extra land for Super Nintendo World could be filled easily. Would you want to see it expanded over 2.. possibly 3 parks?

Yesterday Nintendo and Universal held a joint special event to chat a little bit about Super Nintendo World coming to Universal parks in the future, the first being Osaka Japan in 2020.

Although rumours and wish lists have been rife with suggestions for main attractions nothing had been confirmed until now….. a real life Mario Kart will be the main attraction at Super Nintendo World and will feature the

Assuming this is slightly accurate it looks like Super Nintendo World is going to be a lot of fun! Similar to Diagon Alley at Universal Studios, it appears that the iconic green tube will grant you access to the immersive World acting as a passage way from “normal” in to the Mushroom Kingdom.

The video also suggest that Mario will great visitors and if the rendering is to be believed the land will look like you’re inside a video game! It also gives the impressive of a multi level environment.

The next shot shows a pair of giant Piranha Plants guarding King Koopa’s castle. We’re thinking that perhaps the Plants will be animatronic similar to raptor experience at Universal’s islands of Adventure. The amount of photo opportunities is going to keep Instagram pretty busy 🙂

The end sequence of the video seems to suggest a sprawling World covering quite a few acres. No official word yet when Orlando will get its own Super Nintendo World but its definitely coming.

‘Tis the season to be jolly and Universal are definitely in the mood to give. Yesterday they dropped some imagery of Super Nintendo World set to open at Universal Studios Japan in 2020 just in time for the Tokyo Olympics.

Here’s what Universal had to say;

Super Nintendo World will be comprised of expansive and multilevel environments filled with unprecedented, state-of-the-art rides, interactive areas, shops and restaurants, all featuring Nintendo’s most popular characters and games.

Universal are definitely committed to providing something amazing and stated;

Development cost at Universal Studios Japan is currently expected to exceed 50 billion Yen. Super Nintendo World will be developed mainly using the park’s current parking area and part of an area designated for future expansion. Katsuhiro Miyamoto, Professor Emeritus of Kansai University estimates that Universal Studios Japan — after opening Super Nintendo World — will bring economic benefits following its opening of approximately 6.2 trillion Yen for the Kansai region, 11.7 trillion Yen for Japan as a whole, and will create approximately 1.1 million jobs in Japan within a decade after opening. Universal Studios Japan will introduce the wonder of the world-class, Japan-based entertainment brand of Nintendo not only to Japan but to the world.

Although no further details about what we can expect were given the art work does tell a story. The main part being how prominent Mario is, we’re thinking that perhaps other titles such as Zelda and Final Fantasy wont feature at all!?

Just as promised you’ll note colourful, multi-levels that seem to be prime for interactive areas also some character meet and great opportunities (Princess Peach). Obviously it doesn’t mean that Universal Orlando’s Nintendo World will look anything like this and recent patents suggest  rides based on Mario Kart and Donkey Kong games. One appears to be a drifting car racing attraction that can be used as a Mario Kart themed attraction and the other is a  patent for coaster car technology that can potentially simulate runaway mine cars or more.

Whatever happens it definitely looks exciting.